You Are Here: Geotechnical Lab

Three high pressure pumps and a flowboard for pressure or rate controlled hydraulic testing and stimulation with up to 100L/min at 20MPa.

With the new equipment we can conduct fibre optic distributed temperature sensing (FO-DTS) in boreholes up to 300m deep. A heat pulse unit and a hybrid cable configuration (optical fibre+electrical conductor) allow for enhanced thermal test, too.

The traxial cell (maximum load of 100KN) installed and operational in the climate chamber. This apparatus will be used to measure the hydromechanical properties of Opalinus clay under controlled conditions

The transient data acquisition system enables a very precise recording and evaluation of micro acoustic signals that are created during rock deformation.

The Department of Engineering Geology and Hydrogeology has a geotechnical laboratory which is used for a variety of purposes. The laboratory work takes place in two sections and serves teaching and research in the field of soil and rock mechanics.

Teaching includes internships and the supervision of bachelor and master students.With the help of various experiments the following soil-physical characteristics can be determined according to DIN/ ISO:

Apart from teaching activities, the laboratory is used for conducting geotechnical experiments in various research projects - often involving students in the context of final theses. In the following individual projects will be presented as examples to give a clear impression of the laboratory activities.

Hydromechanical characterisation of the Opalinus Clay

Opalinus clay represents a promising lithological formation for the final disposal of radioactive waste. In the geotechnical laboratory of LIH the hydromechanical behaviour of corresponding clay samples is investigated in triaxial compression tests (axial load: 100 kN, restraint up to 30 MPa). In the two cells of the device, the samples can be isostatically saturated and consolidated and then sheared off under the test frame at very low deformation

Modern 3D printing techniques enable the production of sandstone-analogue specimens with defined and highly reproducible properties and (fracture) geometries. By means of direct shear tests (100kN) on such specimens, the influence of different parameters on the shear strength can be investigated in a much more isolated way than is possible with natural specimens. 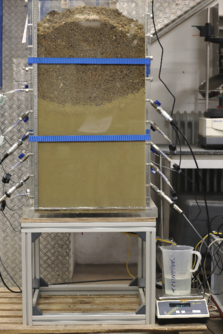 In a further laboratory experiment, the pore pressure development in landslide deposits during subsequent events will be investigated under undrained as well as drained conditions. For this experiment, a plexiglass box was built in which the soil sample is fully saturated before the experiment begins. In order to simulate the impact of a landslide on the debris deposits at the foot of the slope, a second volume of soil is dropped into the Plexiglas box from above using a funnel. Sensors positioned on the sides of the box continuously record the pore pressure in the sediment.

The "FEAR" project deals with various shear tests in which granite surfaces are sheared against each other and the frictional behavior is investigated as a function of the shear rate, the shear stresses and the surface properties. An acoustic emission system is integrated into the test setup, which records and localizes microcracks that occur on the surfaces of the granite samples during the shearing process and evaluates them using seismological methods.

The LIH has extensive equipment for carrying out experiments in the laboratory and on site:

Outlook into the future

Currently, another laboratory area is being set up in the basement (36m²) to create space for another triaxial testing machine, among other things. This will be able to apply an axial load of 350 kN and a restraint of up to 70 MPa. Delivery of the testing machine is scheduled for spring 2022.